In the Diabetic World

Home » Blog » Blogs by Regency's Doctors » In the Diabetic World 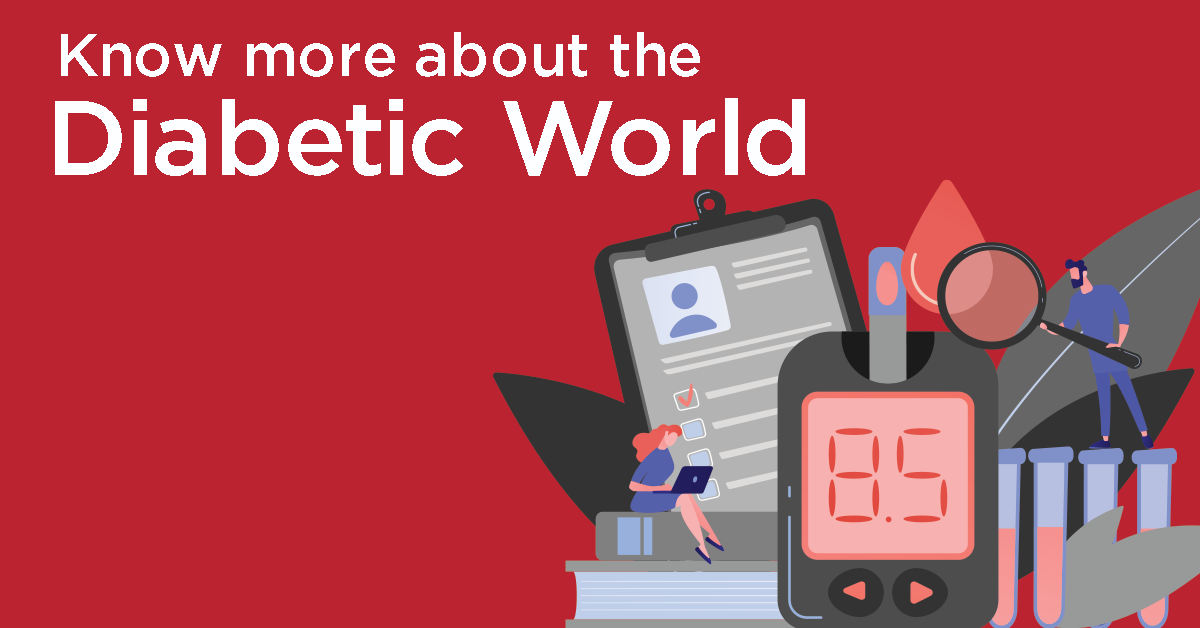 Diabetes is a metabolic disease wherein the human body has abnormally increased glucose levels in the blood. This surge is due to the lack of insulin or the body’s inability to use insulin.

The food we eat is digested and broken down to release glucose into the bloodstream. Meanwhile, the pancreas produces a hormone called ‘insulin’, which works to help the body’s cells absorb the glucose from the blood. In the case of diabetes, your body stops producing insulin or is unable to utilize the produced insulin.

Diabetes is a growing concern, especially in low and middle-income countries like India. According to the WHO, 422 million people across the globe are diabetic, and it is also one of the leading causes of death. TB and heart diseases are other leading causes of illness-related deaths in the world.

In type 1 diabetes, the body’s immune system responds such that it jeopardizes the pancreas, rendering it ineffective to produce insulin. Only about 10% of all diabetic patients have Type 1 diabetes.

Type 2 diabetes is the most common one in the world. In this type, the human body loses its ability to utilize the produced insulin effectively. Hence, the glucose remains in the blood of the diabetic person, and the sugar levels rise.

Type 2 diabetes symptoms are similar to type 1 diabetes but are not as prevalent. Type 2 Diabetes is often diagnosed very late, probably when complications have already arisen. Both Type 1 and Type 2 Diabetes can be controlled by a proper diet, regular exercise, and medication.

Gestational Diabetes is more dangerous than type 1 or type 2 diabetes. It is prevalent in pregnant women that may even lead the child to have it at later stages of adulthood or have complications during pregnancy.

Gestational Diabetes can be prevented by closely following your doctor’s advice for a healthy pregnancy, delivery, and baby.

Impaired Glucose Tolerance (IGT) and Impaired Fasting Glycaemia (IFG) are the conditions that are present in the transition between Normalcy and Diabetes. It transitions to type 2 diabetes in most cases. IGT and IFT have a high chance of transitioning to Type 2 Diabetes.

Diabetes is diagnosed through a blood glucose test. It is checked while fasting and after food is consumed to get a clear picture of the glucose levels before and after food intake. It also depends on the needs of the patient.

When a person consumes food, the pancreas begins to produce insulin. If we consume more food than we require, more insulin is produced to balance it. Over time, there is an excessive load on the pancreas. It eventually reduces or completely stops producing insulin which further leads to diabetes.

Some of the major causes of diabetes are:

Diabetes symptoms vary as per the diabetes type and gender of the patient.

In men, some of the diabetes symptoms are

whereas in women, some of the diabetes symptoms are

How to Treat Diabetes?

Diabetes is a chronic metabolic disease whose symptoms can be managed but can not be cured.

For Type 1 diabetic patients, taking insulin is the treatment. It’s because these patients’ pancreas cannot produce insulin on their own in the first place. But there is a whole list of treatment options ranging from simple exercises and a diabetic diet to pharmaceutical drugs for controlling type 2 diabetes symptoms.

It is critical to note that there is no one-size-fits-all solution. Therefore, consulting with an endocrinology consultant before taking any action is highly recommended.

How to Prevent Diabetes?

Prevention is undoubtedly better than cure. One can prevent diabetes or prevent the pre-existing diabetic condition’s aggravation through regular exercise and following a diabetic diet.

Exercising helps lower blood glucose levels by increasing the body’s sensitivity to insulin and increasing the effectiveness of diabetes medications.

Here are some steps to keep fit:

Maintaining a proper diabetic diet is also crucial in preventing the aggravation of diabetes. A diabetic diet must be tailored to the patients’ specific needs.

All in all, diabetes can take a toll on a person’s overall well-being. However, with proper care, it is a manageable condition. With endocrinologists, diabetologists, and dietitians, Regency Health provides you with complete care for Diabetes.

nextWhat Are The Functions Of Your Spine?