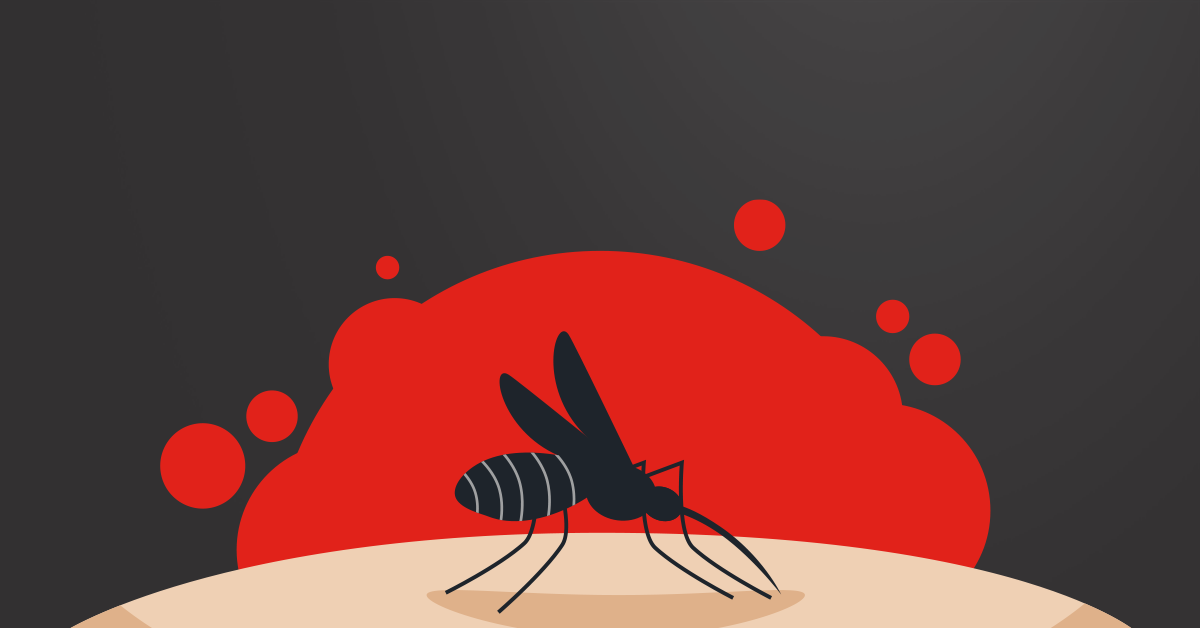 Dengue (pronounced DENgee) also known as breakbone fever, is a mosquito-borne infection that can lead to a severe flu-like illness. It is caused by four different viruses and spread by Aedes mosquitoes.

Causes
Dengue fever is caused by any one of four types of dengue viruses (dengue virus types 1-4 or DENV 1-4) spread by mosquitoes that thrive in and near human lodgings. The virus is transmitted from an infected mosquito to a human. A mosquito bites a person who is infected with the dengue virus, and the virus is passed on when the mosquito bites someone else. It can’t be spread directly from one person to another person. It is possible to have dengue fever more than once. A second infection carries a higher risk of developing a harsher form. After you’ve recovered from dengue fever, you have immunity to the type of virus that infected you — but not to the other three dengue fever virus types. It is possible to get all four dengue viruses in your lifetime.

Symptoms
Symptoms range from mild to severe. Symptoms usually begin 4 to 7 days after the mosquito bite and typically last 3 to 10 days.
– Sudden, high fever
– Intense headache
– Pain behind the eyes
– Aching muscles and joints
– Fatigue
– Vomiting and feeling nauseous
– Skin rash, which appears two to five days after the onset of fever
– Mild bleeding (such a nose bleed, bleeding gums, or easy bruising)

If you have these symptoms of dengue, speak to your doctor. Otherwise, serious problems can develop. These include Dengue Hemorrhagic Fever or Dengue Shock Syndrome (DSS).
Signs and symptoms of dengue hemorrhagic fever or severe dengue — a life-threatening emergency — include:
– Severe abdominal pain
– Persistent vomiting
– Bleeding from your gums or nose
– Blood in your urine, stools or vomit
– Bleeding under the skin, which might look like bruising
– Difficult or rapid breathing
– Cold or clammy skin (shock)
– Fatigue
– Irritability or restlessness

These symptoms may progress to massive bleeding, shock, and death, called Dengue Shock Syndrome. However, effective treatment is possible if a clinical diagnosis is made early.

Prevention
The best way to prevent the disease is to prevent bites by infected mosquitoes, particularly if you are living in or travelling to a tropical area.  To protect yourself:
– Use screens on windows and doors. Repair holes in screens to keep mosquitoes outdoors.
– Wear protective clothing. When you go into mosquito-infested areas, wear a long-sleeved shirt, long pants, socks and shoes.
– Use mosquito repellents, even indoors.
– Remove excess water from plant pot plates
– Cover strollers and baby carriers with mosquito netting
– Once a week, empty and scrub, turn over, cover, or throw out items that hold water, such as tires, buckets, planters, toys, pools, birdbaths, flowerpots, or trash containers.
– Sleep under a mosquito bed net if you are outside or in a room that does not have screens.
– Ensure proper waste disposal

Treatment
Currently, there is no vaccine to prevent the general population from contracting it. For typical dengue fever, the treatment is directed toward relief of the symptoms (symptomatic treatment). Effective treatment is only possible if a clinical diagnosis is made early.

If you are experiencing any signs and symptoms of Dengue Fever, you can contact Regency Hospital. We are well-equipped to provide treatment for the same.

previousArthritis - Know What You Don't Know

nextTypes of Coronavirus Face Mask: What You Should Know