Sarcoma Awareness Month: What is Sarcoma? 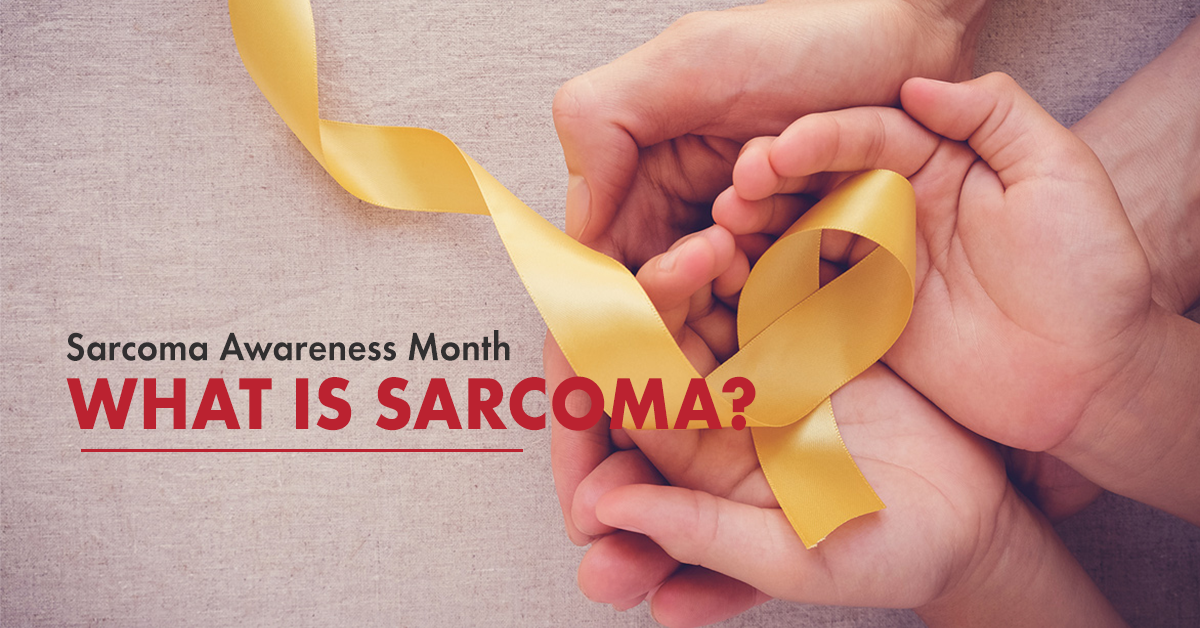 What is Sarcoma?
A sarcoma is a rare kind of cancer. Sarcomas grow in connective tissue — cells that connect or support other kinds of tissue in your body. These tumours are most common in the bones, muscles, tendons, cartilage, nerves, fat, and blood vessels of your arms and legs, but they can also happen in other areas of your body. Although there are more than 50 types of sarcoma, they can be grouped into two main kinds: soft tissue sarcoma and bone sarcoma, or osteosarcoma. It is made up of many “subtypes” because it can arise from a variety of tissue structures. Because these tissues are found everywhere on the body, Sarcomas can arise anywhere. Thus, within each site of the more “common” cancers, there is the occasional surprise sarcoma diagnosis (e.g., breast sarcoma, stomach sarcoma, lung sarcoma, ovarian sarcoma, etc.). The most frequent location is the limbs since this is where the majority of the body’s connective tissue resides. They are commonly hidden deep in the body, so sarcoma is often diagnosed when it has already become too large to expect a hope of being cured.

Causes
Scientists do not fully understand why some people develop sarcomas while the vast majority do not. They tend to occur sporadically, with little or no family history. However, by identifying common characteristics in groups with unusually high occurrence rates, researchers have been able to single out some factors that may play a role in causing sarcomas.
– High doses of radiation: Having undergone previous radiation therapy for cancer increases the risk of developing a soft tissue sarcoma later on.
– Genetic conditions: Genetic factors may play a role. People with syndromes such as neurofibromatosis and tuberous sclerosis appear to have a higher risk of sarcoma.
– Exposure to chemicals: Exposure to vinyl chloride, dioxins, and phenoxyacetic herbicides may increase the risk, but more evidence is needed to confirm this.

Symptoms
Early signs of soft tissue sarcoma can include a painless lump or swelling. Some sarcomas may not cause any symptoms until they grow and press on neighbouring nerves, organs or muscles. Their growth may cause pain, a feeling of fullness or breathing problems.
The most common symptoms of bone sarcomas include the following:
– Pain and/or swelling in an arm or leg, the trunk, the pelvis or the back; swelling may or may not feel warm to the touch
– A limited range of motion in a joint
– A fever of unknown origin
– A bone that breaks from no apparent cause
These symptoms could be signs of many other medical conditions. Always check with your doctor for a proper diagnosis.

Diagnosis and Treatment
Sarcomas are often first noticed as an odd lump or swelling under the skin, which may or may not be painful. No screening test yet exists to detect sarcoma early. Many are detected incidentally, during testing or scans performed for other conditions or symptoms. The only reliable way to determine whether a tumour is benign or malignant is through a surgical biopsy. Therefore, all soft tissue and bone lumps that persist or grow should be biopsied.
Your treatment plan and recovery will depend on a variety of factors, including the following:
– Type of sarcoma
– Tumour’s location, grade and size
– Your age
– Whether the cancer is new or recurrent

A doctor may recommend one or more of the following treatment options for bone or soft tissue sarcoma:
Surgery: This is the most common treatment for sarcoma. It aims to remove the tumour and some of the normal surrounding tissue. The surgeon will usually take a tissue sample to carry out a biopsy at the same time. This can confirm the exact type of tumour.
Radiation therapy: A person may have this before or after surgery to destroy cancer cells.
Chemotherapy: Chemotherapy appears to be more effective in treating bone sarcoma than soft tissue sarcoma. Chemotherapy can kill cancer cells that remain after surgery.

previousStop the Bleeding, Learn about Haemophilia.