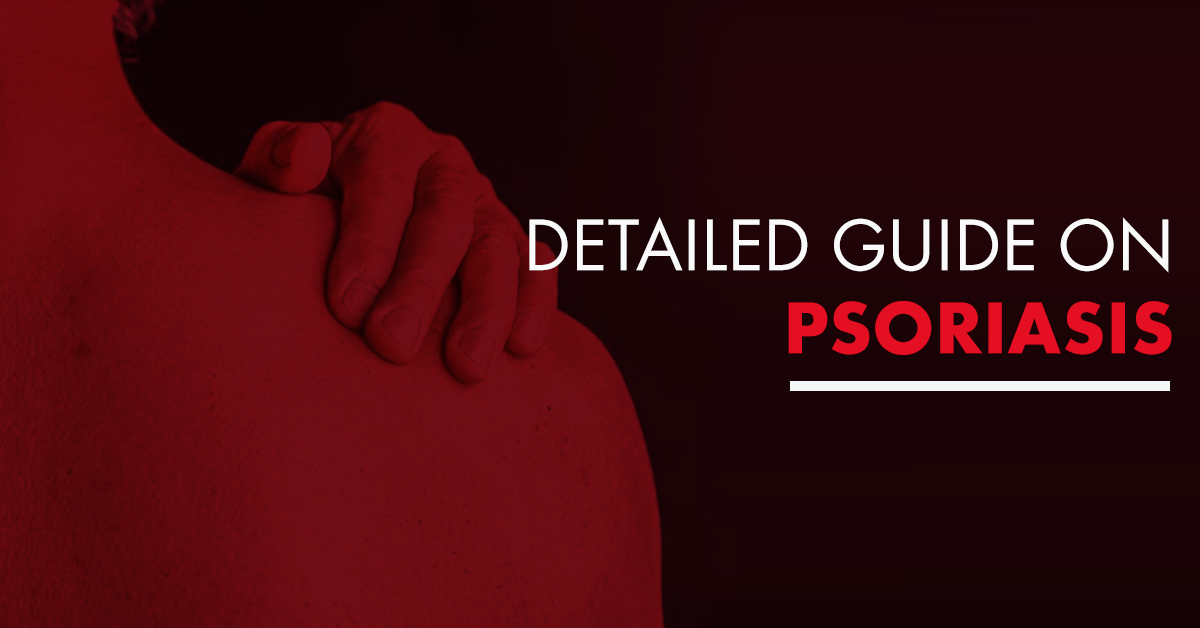 Many people have heard of psoriasis but don’t know much more about it than it’s a skin condition.
Psoriasis is an autoimmune skin disease which means the immune system sends a continuous signal to speed up the skin cell growth cycle resulting in a faster turn over of skin cells every few days where it would normally take about one month. This leaves a pile-up of dead skin cells on the surface of the epidermis and throughout the dermis. Psoriasis usually appears as red or pink plaques of raised, thick, scaly skin. However, it can also appear as small flat bumps or large thick plaques. Contrary to popular belief, Psoriasis is not contagious, you cannot contract the disease by touching someone else or being in intimate contact with them.

Causes
There is no one reason psoriasis occurs, there are many factors that come into play to result in such a drastic flare-up of inflammation. Psoriasis is the systemic inflammation of the body, as a result, anything that places pressure on or weakens the immune system will exasperate symptoms. Psoriasis can run in families, although the exact role genetics plays in causing psoriasis is unclear. The environment that one lives in plays a part in determining the likelihood of contracting psoriasis. Areas with low seasonal temperatures, further from the equator, lack of sunlight or restricted ultraviolet light exposure can increase the likelihood of the disease.

Plenty of everyday things can act as a trigger, causing psoriasis to appear for the first time. Common psoriasis triggers include:
– Stress
– Skin injuries, such as a cut or bad sunburn
– Infection, such as strep throat
– Some medications, including lithium, prednisone, and hydroxychloroquine
– Weather, especially cold, dry weather
– Tobacco
– Alcohol (heavy drinking)
These triggers can also cause psoriasis flare-ups. Different people have different triggers. That’s why it’s so important for people who have psoriasis to know what triggers their psoriasis. Avoiding triggers can reduce psoriasis flares.

Symptoms
The severity of psoriasis varies greatly from person to person. For some, it’s just a minor irritation, but for others, it can majorly affect their quality of life. It is a long-lasting (chronic) disease that usually involves periods when you have no symptoms or mild symptoms, followed by periods when symptoms are more severe. The knees, elbows and scalp are among the most common areas for a psoriasis breakout, but it could also affect areas of your torso, palms, lower back and the soles of your feet.

Types
There are several different types of psoriasis that vary, depending on the appearance of the scales and their location on the body.

– Plaque psoriasis
About 80–90% of people with psoriasis have plaque psoriasis. It usually shows as raised, inflamed, red lesions, covered by silvery, white scales, most often on the elbows, knees, scalp, and lower back.

– Inverse psoriasis
Inverse psoriasis has red lesions, usually without the scales that occur in plaque psoriasis. The lesions might be smooth and shiny. Occur most commonly under the breasts, in the armpits, near the genitals, under the buttocks, or in abdominal folds.

– Pustular Psoriasis
Pustular psoriasis consists of well-defined, white pustules on the skin. These are filled with pus that is non-infectious. The skin around the bumps is reddish and large portions of the skin may redden as well.

– Erythrodermic Psoriasis
Erythrodermic psoriasis is a rare type of psoriasis that is extremely inflammatory and can affect most of the body’s surface causing the skin to become bright red. It appears as a red, peeling rash that often itches or burns.

– Guttate Psoriasis
Psoriasis that has small, salmon-pink coloured drops on the skin is guttate psoriasis. There is usually a fine silver-white buildup (scale) on the drop-like lesion that is finer than the scale in plaque psoriasis.

Treatment
Psoriasis is an autoimmune disease when left untreated and lifestyle not adjusted can lead to other complications in health such as cardiovascular disease, lymphoma and non-melanoma skin cancer.
While there isn’t a cure for psoriasis, medication can help alleviate and reduce symptoms. In most cases, the first treatment used will be a topical treatment, such as creams and ointments applied to the skin. If these are not effective, or your condition is more severe, a treatment called phototherapy may be used. Phototherapy involves exposing your skin to certain types of ultraviolet light. In severe cases, where the above treatments are ineffective, systemic treatments may be used. These are oral or injected medicines that work throughout the whole body.

previousDifference Between Anxiety And Depression