Difference Between Anxiety And Depression 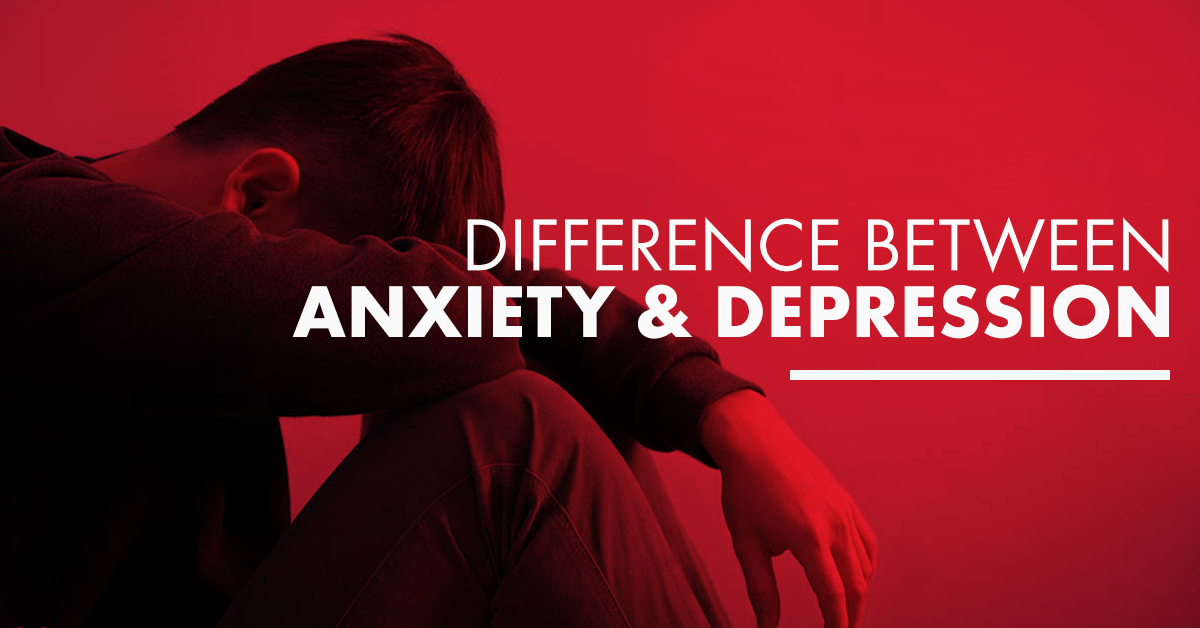 Two of the most common mental health disorders among people in the world are Depression and Anxiety. Both share a biological basis. Persistent states of anxiety or low moods like those experienced by people with clinical anxiety and mood disorders involve changes in neurotransmitter function. Low serotonin levels are thought to play a role in both, along with other brain chemicals such as dopamine and epinephrine. While the biological underpinnings of these problems are similar, anxiety and depression are experienced differently.

What is Depression?
Some people claim they are depressed when they are merely sad or down at times, but this is actually a normal part of being human. A person can be diagnosed as having depression or experiencing a Major Depressive Episode if there is a significant decrease in mood and/or interest in activities that s/he once enjoyed.

What is Anxiety?
A person with anxiety disorder, however, experiences fear, panic or anxiety in situations where most people would not feel anxious or threatened. Believed to be caused in part by a malfunction of brain chemistry, generalized anxiety is not the normal apprehension that one feels before taking a test or awaiting the outcome of a biopsy. The sufferer may experience sudden panic or anxiety attacks without any recognized trigger and often lives with constant nagging worry or anxiousness.

Symptoms
There are some commonalities between anxiety and depression so people often get them confused. Moreover, many of the symptoms of these disorders overlap, creating even more confusion.

The symptoms of depression include more than just persistent sadness or an empty feeling. Depression can manifest in many additional ways with the following symptoms, among others:

– Significant loss of interest or enjoyment in activities that once interested him/her.
– Significant decrease in mood.
– Difficulty sleeping (insomnia) or sleeping too much (hypersomnia).
– Marked weight change or change in appetite.
– Significant loss of energy/fatigue.
– Decreased ability to concentrate or indecisiveness.
– Persistent thoughts of suicide.
– Thoughts of worthlessness or guilt.
– A significant change in activity level (psychomotor agitation or retardation).
However, not every person diagnosed with depression will experience all of the symptoms.

While someone with Anxiety ca experience the following symptoms:

As can be seen, many symptoms of anxiety are similar to or the same as those for depression. It is the persistent fear in anxiety that differentiates it from depression.

Key Difference
There are some key differences between depression and anxiety. The first is that depression is a mood disorder and anxiety is a nervous disorder. It is not uncommon, though, for people who are depressed to also have anxiety, and vice versa. This is called having a dual diagnosis.
Another key difference is that Depression is essentially one condition, although it has lots of different symptoms and may feel very different to different people. Anxiety, on the other hand, is an umbrella term that covers a range of more specific conditions. The most common of these is generalised anxiety disorder (GAD) but it also includes phobias, panic disorders, adjustment disorder, and stress reaction.

Treatments
When it comes to depression and anxiety disorders, the two main categories of treatment are psychological therapies and medicines. Psychological therapies involve talking through your thoughts and feelings with a qualified professional. An example of this is cognitive behavioural therapy, which aims to address the way your thoughts, feelings and behaviours interact. Medicines called antidepressants can be used for both depression and anxiety disorders, and are effective for many people.
In addition, exercise, hobbies, breathing exercises, and mindfulness meditation are just some of the alternative methods that have been used to help people handle anxiety. In many cases, these can help with depression as well. The key is that they can be successful in encouraging recovery without the risk of taking drugs that may contribute to issues of substance abuse and addiction, and cause other health problems.

If you’re struggling with your mood or some of the symptoms mentioned here are familiar to you, it’s important to seek help. Without treatment, such disorders can restrict a person’s ability to work, maintain relationships, or even leave the house. Don’t worry about labelling what you’re experiencing as anxiety or depression. What’s important is to get in touch with the right mental experts so that they can find out more and offer you the support you need.

Regency Health has a team of highly skilled and experienced Psychiatrists, get in touch with them for help.