Home » Blog » Blogs by Regency Doctor's » What is Alzheimer’s disease and its stages? 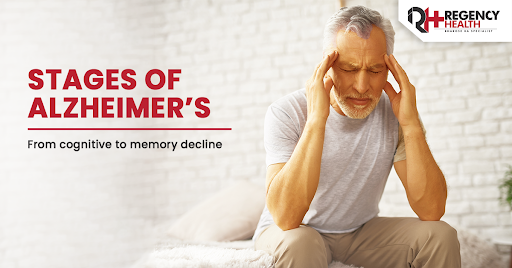 Alzheimer’s is a neurological disorder that causes a loss of neurons and synapses leading to loss of memory, and thinking capabilities. In addition to this, Alzheimer’s also results in a decline in various behavioral and social skills. In most cases, the early onset of Alzheimer’s starts in a person’s 60s and stays with them for the rest of their life. Alzheimer’s often progresses into dementia and can prove to be fatal if not addressed during the initial stages.

Alzheimer’s disease is named after a German physicist Dr. Alois Alzheimer who first observed the changes in a woman’s brain tissues after she died from a mysterious mental illness in 1906. The woman displayed several symptoms such as speech issues, memory loss, and unpredictable behavior all of which are identified as symptoms of Alzheimer’s today. Early detection is one of the best ways to battle Alzheimer’s disease and it can help the patient to a great extent in having a better quality of life.

During the onset of the disease, parts of the patient’s brain involved in handling memory such as the hippocampus and entorhinal cortex are damaged. This damage later spreads to the cerebral cortex which plays a vital role in speech, logical reasoning, and behavioral skills. Patients’ neurons are also affected due to Alzheimer’s which results in hampering their primary function of transmitting signals between different parts of the brain.

The symptoms of Alzheimer’s are typically divided into three stages based on their spread to the various parts of the brain and the damage inflicted on it. There is no specific treatment to Alzheimer’s disease available however, proper care and attention to patient’s needs can definitely help in slowing the damage.

The first stage of Alzheimer’s typically involves mild cognitive impairment where the memory and thinking abilities start getting slightly impacted. In this stage, the affected person is still able to function independently and perform activities like driving, interact normally in social circles and perform various daily activities without much help. The main issue in this stage is the person failing to recollect incidents or memories properly. The inability in recollecting names and faces is also a common Alzheimer’s disease symptom during the early stages. A person suffering from this stage of Alzheimer’s also displays symptoms like misplacing household things, forgetting new information easily, and facing difficulty in planning and organizing tasks.

The middle stage of Alzheimer’s is usually the longest one and requires critical care to prevent it from deteriorating further. In the moderate stage, people find difficulty in performing basic tasks like cooking, cleaning, and driving and require partial assistance. In this stage, people might feel moody and irritable and often forget their basic personal details. Patients suffering from Alzheimer’s often get confused about which day it is, their address, and even their name. Facing difficulty in dressing properly, sleeplessness, striking changes in behavior are some other indicators of this stage. Another key Alzheimer’s disease symptom during this stage is irrational behaviour and display of delusion and severe anger issues.

This is one of the most challenging stages for patients as well as their loved ones. The Alzheimer’s disease symptoms displayed at this level could be quite heartbreaking to witness. In this stage, patients lose complete awareness of their surroundings and recent experiences. They also lose their ability to walk, sit and even eat properly. Patients usually suffer from anger, depression, and paranoia and display extreme mood changes. While some individuals may still be able to speak coherently, others might face severe trouble in expressing basic emotions like sorrow, pain, and happiness. Patients in this stage also become highly susceptible to infections such as pneumonia leading to further medical complications. This stage of Alzheimer’s can be emotionally and financially exhausting for all the parties involved and patients require round-the-clock supervision and care.

To create awareness on Alzheimer’s and erase the general stigma associated with it, 21st September is marked as World Alzheimer’s Day. The World Alzheimer’s Day 2022 is focused on post-diagnosis care and will highlight the role of a support circle for the patients.  While a complete treatment of Alzheimer’s disease is not possible and will stay with people forever, early diagnosis in the first stage can help a person slow down further symptoms and lead a normal life. It is advised that patients who showcase any of the above symptoms must get themselves checked immediately at a super speciality hospital.